Has anyone converted a walker to stand up?

I am trying to figure out how, or where, to start cutting on my Luthers legs to make him stand up to maximum height. Anyone tried this yet?

You can disassembled the model where it's glued. Cut open my thumb when I tried to get the stupid thing of the base, so not trying again... Just be careful, take the top off and pull the legs aprt and take the middle piece off and you have the legs to work with.

I kinda wish they would sell the walkers as is or as a model kit where you can build & pose them yourself.. though I guess the only real posable part is the legs. would still be nice though.

Looking closer at the Luther, I think that making it stand up will require removal and modification of the "pneumatic shocks" on each leg. This is certainly no big deal.

Someone did this to the allied Hot Dog, and the results were...... quite weird. This thing just doesn't looke like it was really designed to walk. 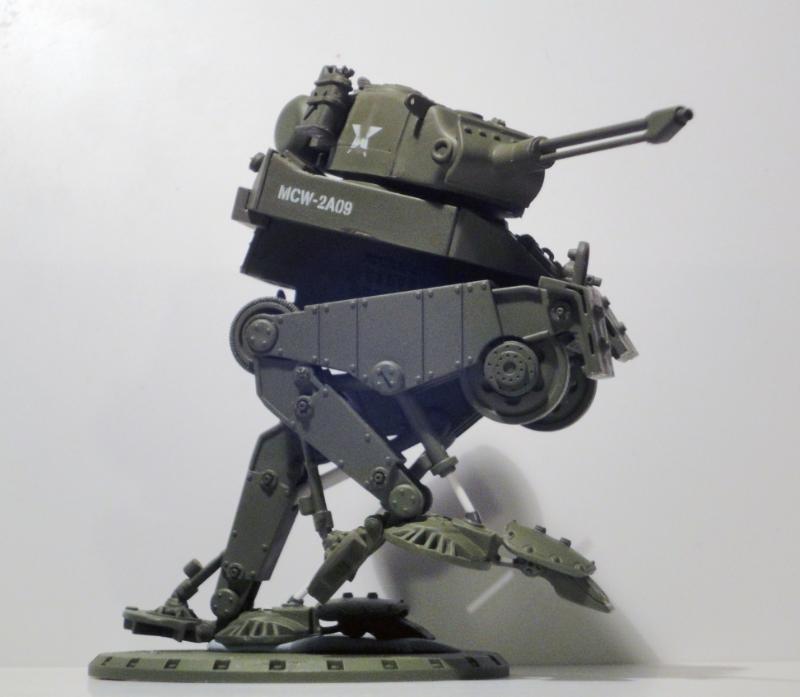 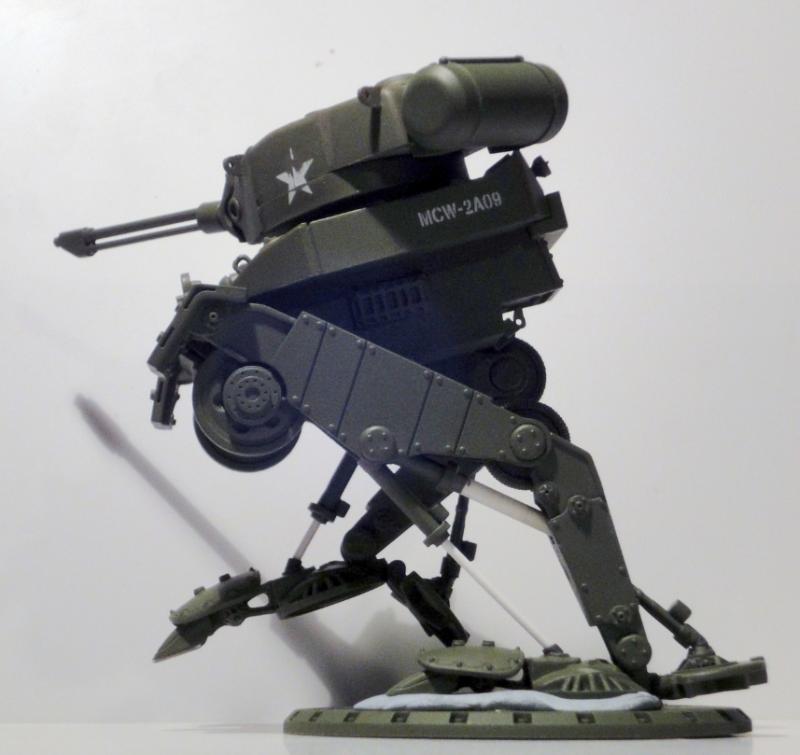 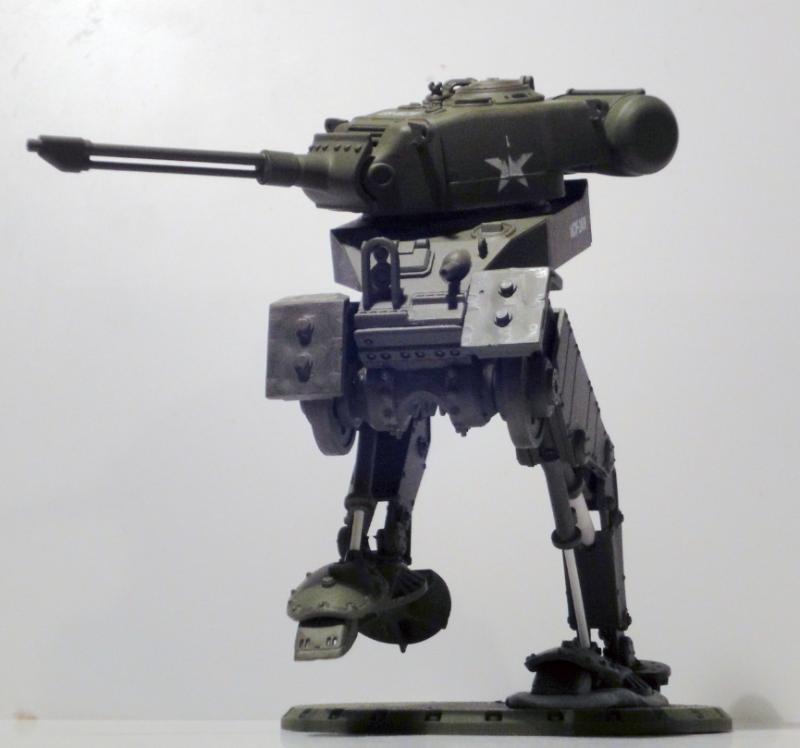 Actually, I tried to achieve that on my entry for the contest, to create a taller version of the Luther.

As I was trying new poses (indeed, it is very possible to free the articulations by carefully breaking the glue bonds), I inverted the legs and it turned into a decent "chicken walker".

As you suspected, Fulminarex, I had to elongate the actuators, to accomodate the new lenght of the segment (added 6mm of plastic sprue).

I picked up one of the Barking Dog kits from Dust Game as its an unassembled kit. I figured it would be easier to convert it to the running position in the beginning rather than tearing one down. Its in the painting line but I have some others first. I will post picks as I go when I get to it.

Oh, so the kits from dust-models.com are all in pieces? I might order a couple if that's the case. I'd like to try building one from scratch, it would be easier to do some cool conversions that way

This is an excellent mod. What do you call it? Maybe Adler, for Eagle. It does look ferocious. Have you have a card for it? Can you guide some of us into building our own? I really like this!

I can see how the elongated cockpit can be reminiscent of a beak, but truth be told my main source of inspiration was Yoji Shinkawa's Metal Gear Rex, hence it's name " Metallgehäuse ".

I'm not into the game yet, I rather converted it for modeling purposes, so I don't have stats for this variant.

I've got some task to complete right now, but I promise I'll tell you how I did in a future post ...

Sorry it took some time, Fulminarex, I can now answer your request

#1 – Free the knees and ankles joints by exerting a controlled force on the limbs (hopefully, the glue bonds should yeld before the plastic does). Cut the actuators at their highest junction, then free their articulations at both ends. Separate the soles from the feet, cut the fixation **** to get a flat surface. Re-glue the feet backwards to make it a "chicken-walker".

#2 – Start this step by rotating the "pelvis" section by 180°. Take some time to study the position you want for you mech. Give dynamism to the legs by spreading them outwards : saw the hips fixations, plant a metal wire inside the plastic cylinder, give them their new orientation (in this case, towards the back), and glue in position. I stuck some sort of tank at the back of the machine ... well, because it looked cool 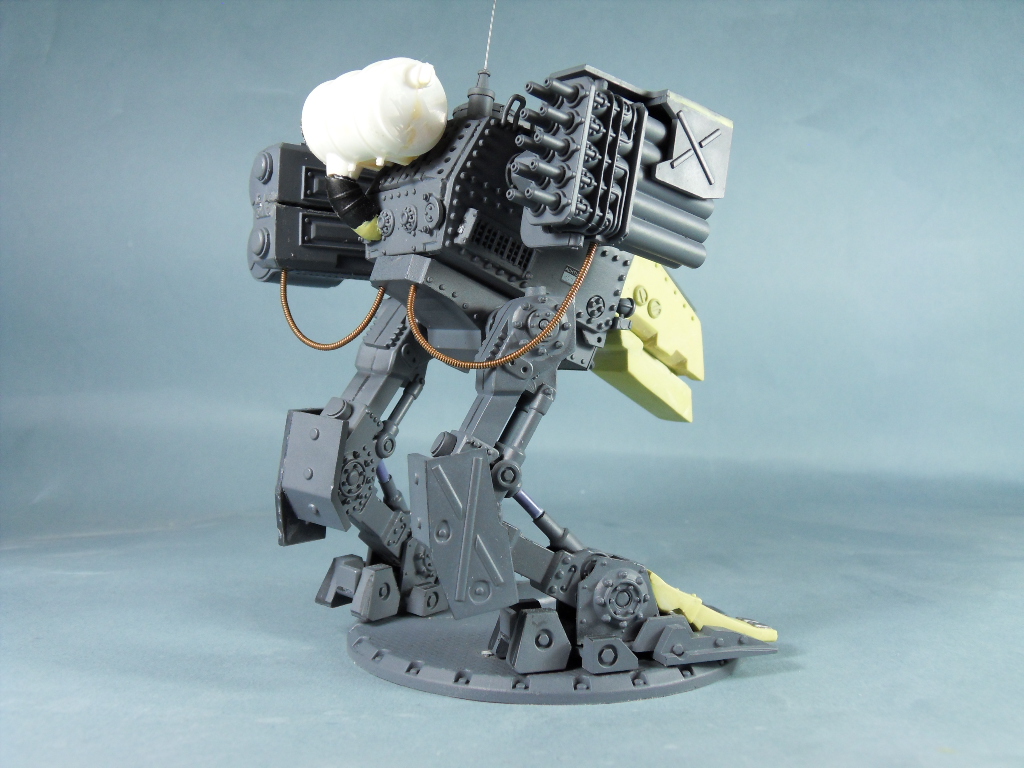 #3 – Once you are satisfied with the new pose, glue the limbs again. Put a drop of superglue on the tip of a needle, then let it slip into the joints. Use thick plastic sprue to adjust the actuators to the good lenght. Add extra protection by dismantling Kampfzange elements, glue the sides on knee armour. Remove the thin layer of grey paint on the parts with sandpaper to enhance adherence. I removed the tubes from the hips (since they became frontal), then hid the resulting hole using Kotobukiya spare elements (these generic sprues really came in handy). 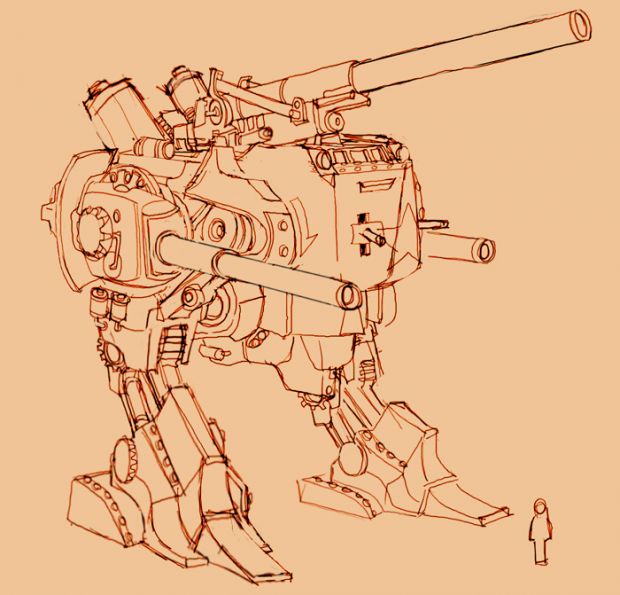 #4 – New shape for the feet came from a mech concept found on some blog. Start by mixing yellow-grey milliput, put it in place between the toes. Flatten the blob to good shape & dimensions using a colour shaper. Once the elements are dry, use a file, then sandpaper to make them more regular and get sharp angles. Small details on the main toes come (again) from a Kotobukiya sprue.

#5 – At this point, our walker looked a bit like a star wars AT-ST. Now for the Metal Gear beak. Using the previous milliput technique, create the upper jaw by applying a rough form on the front plate, which covers the horizontal slit. It doesn't need to be regular at this point, it's just a basic form to allow further work on solid a shape. You can make the milliput cure faster by putting it under a filament bulb, but take extra-care to avoid plastic meltdown. Then, apply a second layer covering the whole shape, this time more accurately. File & sandpaper step. Repeat the operation to create the lower jaw. Top plate wasn't originally supposed to be an element, it is basically a sprue of rivets, but I liked the way they were shrinking from top to bottom, it gave the beak a spinal, organic feeling. So I made the sprue an element. 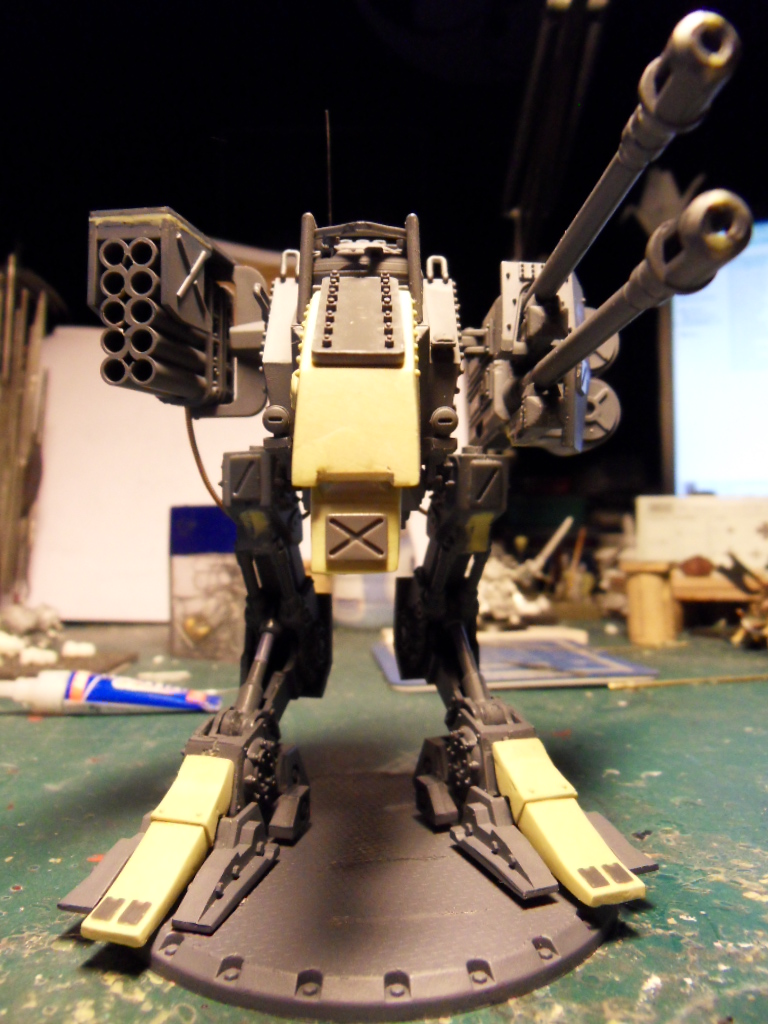 #6 – Weaponry. I encased the missile launcher inside the Kampfzange shoulder, worked a treat (if you make a slight cut in the plastic, it fits perfectly). For the main weapon, unglue the parts, starting with the mantles. Unglue the ammo drums. Cut deeply with a saw, then glue both weapons back to back. Glue the drums laterally, make a clean junction with putty. Cut the mantle to accomodate the second barrel. Link the weapons to the main body with guitar wire. Bend it carefully with pliers, beware not to crush it. I admit the wire I chose seems a bit thin, would have used a thicker one if it was available. 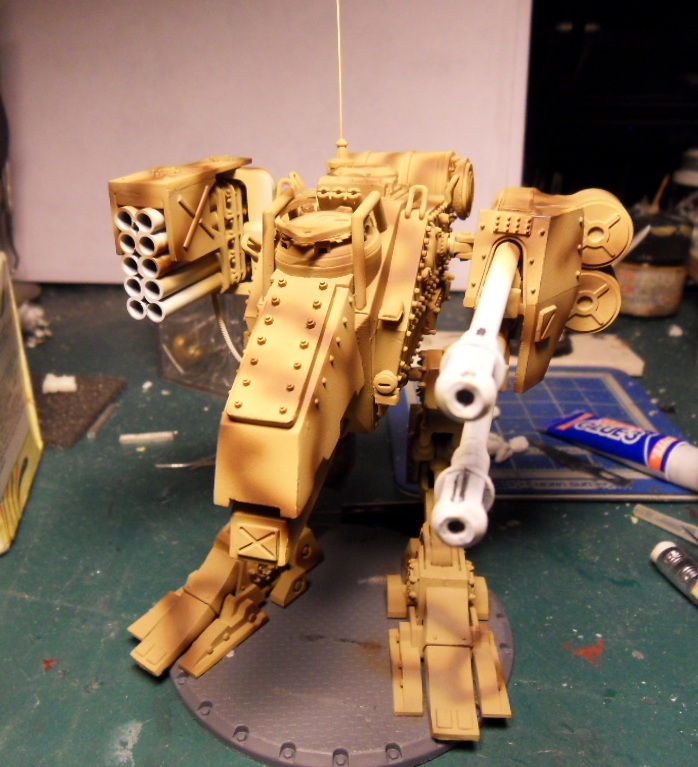 #7 - Paint. I sprayed a white primer on all elements. Slight imperfections can be revealed at this step (mainly assembly lines), so fill them with putty. If the model is intended for gaming, I usually prefer to apply a first layer of acrylic paint with a brush for the sake of solidity : airburshed layer is very thin, and if manipulated often, paint will easily wear off. Base color is Tamiya XF-59 Desert Yellow. I searched for a desert camouflage pattern, and used a mix of acrylic browns to draw it with an airbrush. Rivets logically should be of the same colour than the hull, but leaving them black created an interesting animation on the whole machine (very time-consuming operation). I added a third colour for contrast, painting some elements in a light grey. I did some slight highlighting with GW bleached bone on top parts. No real need to put extra efforts on this step, since this a big detailed warmachine with camouflage pattern, it catches light very naturally. I added some pigments on feet, weapons and ammo drums.

#8 - Metal. Small elements were painted using GW Mithril Silver. Bigger, structural ones were undercoated black, then boltgun metal. A cool way to give elements a greasy aspect is to apply a coat of X-19 Tamiya Smoke. Then highlight with boltgun. Some other elements (grates) were painted using Tamiya gunmetal. 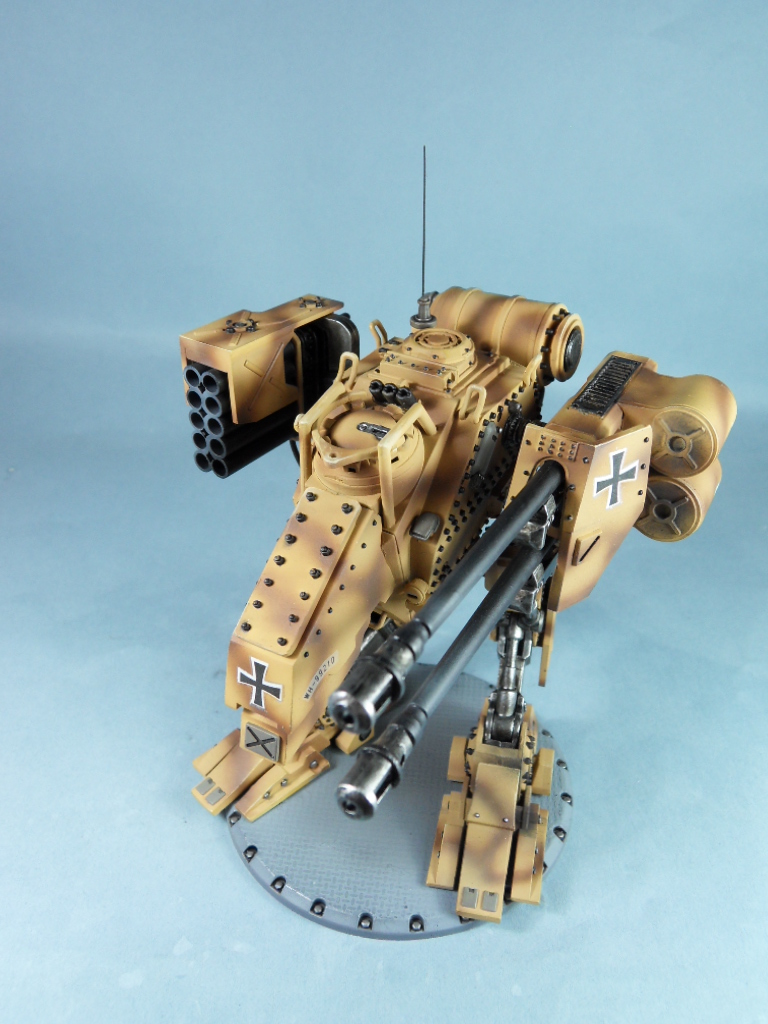 #9 – Decals. At first, I didn't dare to put Wehrmacht paraphernalia on my model for the contest (some people can get touchy about this matter), but I must say it is visually striking, and considerably emphasizes the uchronian theme.

Hope you will find these explanations helpful

XUR, will you build me one if I pay you?

I can send you the parts!

Also, what are the stats for it? Have you came up with any ideas for stats?

Looks like a 1/2 score for a Nebelwerfer but the guns are huge! If you want to build me one, I might actually ask you to use the 5cm guns as the dual, as I cant imagine how these twin 8.8 will factor.....

This is the Skoda prototype of the Luther 3 Ludolf, in which case it can make sense. Perhaps it was built for the FJ units and the HG Division as a air droppable walker.

Maybe it is a 3 wound unit too, with a lower armor value, but AGILE and FAST, and with JUMP

AND, maybe the guns are twin, but only one fires at a time, and the action of the one firing reloads the other one, so the stats do not have to be so high.

Thats an awsome conversion there, nice one.

Fulminarex, I'm afraid that's gonna be a double disappointment for you :

first, I did this conversion because I'm a walker aficionado, but I don't play the game yet, so I don't have a clue what its stats might be.

Second, I seldom take commissioned works of this type, main reason being the sheer price of the operation is only justified if the model is to be casted and commercialized, hardly if it is destined to remain a unique model.

I realize building milliput elements may appear intimidating at first, but maybe the best solution in this case is to have a try at kit-bashing, by using parts of other plastic kits in unexpected ways.

For example, have you thought of combining a Luther with the hull of an AT43 Firetoad to get a similar result ?

I can kit bash without problem, and even build what I need. If I can get it done for me, all the better!

I am going to try some kit bashing soon, mostly to convert a Luther into a flam-panzer and 122mm mortar unit.