Just had a jolly day at Gamesfest. Met Jon and Elliot in the flesh, excellent chaps both. I would like to thank them for running a great game and for the other players for playing especially the father and son combo who gave up and left me with the Warrior to take over who I eventually won a very close game with

Managed to turn the thumbscrews on and they confessed that the next expansion is definitely The Timescape, the Ork Gargant follower looks awesome!

I am reporting from my hotel room after a few celebratory ciders in your honour!

The game was rather cool and Elliott and I were very pleased that everyone got into the swing of things and much blood was spilled.

Geoff's Ghoul bit the dust early (how is that possible?) and took over Daniel/Maciej's Warrior as they had to go and mingle. Alex's Elf was the first to the Crown and started throwing spells about. Sam's Sorceress followed shortly afterwards and traded blows with the Elf, but was sadly killed after both were down to one life. Geoff's Warrior then got through to the Inner Region and caught up with the Elf and was victorious after a few rounds of combat. Sadly, this left Sunny's Amazon/Minstrel combo (don't ask!) languishing in the Middle Region as he had been left with a Quest which required him to take a life from a character!! He was allowed to change his Quest, but opted to surrender as by this time, the Warrior was a complete powerhouse and would have made short work of the Amazon/Minstrel!

Thanks to Geoff, Sam, Alex, Sunny and Daniel/Maciej for a great time. We have said that we will be doing it again next year, when hopefully we can be a little more organised.

Early in the game, Geoff explains to everyone where the board is! 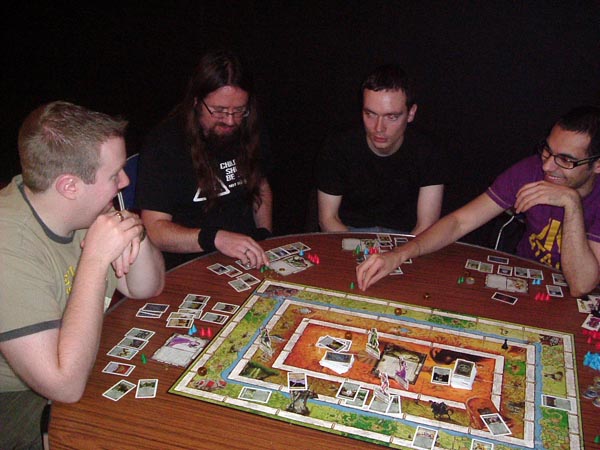 S miles betray the evil intentions of the murderous group!! 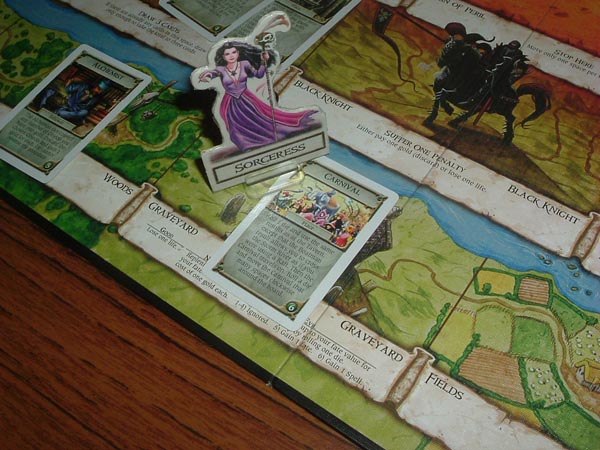 Party in the Graveyard!!!!

Note 1 - We used the 4th Edition stand-ups for the game for a bit more colour as the minis were unpainted. Hence the Amazon/Minstrel hybrid!

Note 2 - Geoff forgot to mention that the new Timescape will be a completely black overlay for the main board where charaters float around in limbo until they can draw a card that makes them win the game. Any characters who bump into one another do not encounter each other as they are not in the same dimension. Estimated playing time for the expansion is 12 million years.

Thank god, that it was a joke about Timescape..

I thought really, that the Timescape would be coming..

It could be a leak

Thank god, that it was a joke about Timescape..

I thought really, that the Timescape would be coming..

It could be a leak