New game to be announced 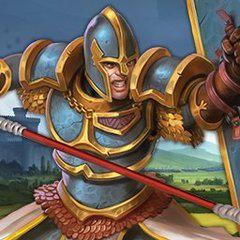 So they say there will be a new game announced!

Any speculations as to what? Will this be an original game (like Descent or Runebound) or an older game/formula applied to the Terrinoth universe like Runewars (very Risk like) or DungeonQuest? I would like to see a new original game.

Unfortunetly I live in FL and a trip like that is a stretch. So I wont be able to attend.

I am hoping for a coop adventure game...

I could actually see a Battles of Terrinoth game, like with Battles of Westeros. After all, when that game was announced, they did say they were planning to release more products under the Battlelore System. But I'd like a simpler co-op game than Descent (that is, something that takes less than 30 minutes to setup).

Now that would be kind of cool! I was thinking more of a card game, but BL Terrinoth works for me!

My first thought were the same as Talismanisland. I think that the new game will be a Terrinoth LCG . I don't know if cooperative but I cuonting on a card game.

Terrinoth RPG could be published the same way as WFRP 3ed is or the way DH is. But still after a lot of waiting an RPG set in this world would be a hamer for all the fans of the setting out there. And If i remember correctly there were some question about the possibility of making such a game at the forum but there was no official anwser.

Terrinoth skirmish would also be a amazing choice. We have so many figures by now so the heroes or monsters would not be a problem. Ther could be many fraction and the game could be published like Dust Tactics. So the core set would come in a big box with some plastic models, cards, tokens, rulebook, two-side game board, some dice and plastic enviroments. So it would be realy to play just out of the box. This would be a must have for me.

Can't wait to hear an official anwser and to see an announcement.

PS. they could do the same for an old forgotten setting like Midnight. But that's just my wish.

So, is anyone even more excited about this unannounced game being designed by Corey Konieczka? I mean, Mansions of Madness (which looks to be an instant classic) isn't even out yet and he's already got another one put together? This guy is on a roll. Can't wait to see what kind of Terrinoth game this is going to be with Corey at the head.

You guys may be on to something with a Terrinoth Battlelore game.

Or they use the Molds from the new Terrinoth Battlelore game for a new Descent vanilla expansions.

The suspense is killing me!!!!

I will love to see a Terrinoth LCG or Terrinoth RPG or a new Descent expansion. That would be a bomb for me.

The new game (sadly) is a card game, named "Rune Age, designed by Corey K.". It seems to use the same factions of Runewars, and is a building-deck game...

On BGG there's a preliminary review.

Thanks, HunterBoy, for pointing this out. Not my cup of tea, too. I already play / would play three LCG (Call of Cthulhu, A Game of Thrones and The Lord of the Rings) and it's enough. Anyway, hope many people will be happy with this announcement :-)

So I was right, a new card game is comming, I can just hope that this one won't be an LCG - endless wallet squeezer. Eh, I was hoping for something else. I will have to see it and know the diferences between Rune Age, Warhammer: Invasion and Lord Of The Rings LCG. Maybe I will buy it but I'm not so sure.

PS. And I found some news on the net and it looks like a deck-building game with scenarios, battles and so on. So it looks like a cross over of such titles from FFG like Warhammer: Invasion meets with Lord Of The Rings LCG. Hmm we will see more after the official announcement, and it looks like the game will be avaliable summer 2011.

Were any expansions announced?

Nice. As far as I can see it is win-win for FFG and fans of Terrinoth. Anything that already exists in Terrinoth can go in Rune Age, and anything new in Rune Age might filter into the other Terrinoth games. We can only hope...

I still want a Terrinoth RPG. I would call it Runetouched or something like that. =P

Most everything in Terrinoth games are divided into 3, so I would imagine that would continue.

I still want a Terrinoth RPG. I would call it Runetouched or something like that. =P

Most everything in Terrinoth games are divided into 3, so I would imagine that would continue.

I've started working on one of my own, but I would like to know what the community thinks at some point. Anyone have good links to discussions about a Terrinoth or Runebound Roleplaying Game?